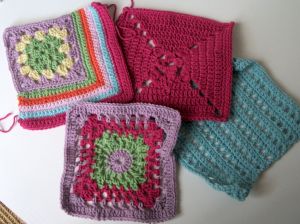 I’m pleased with the effect of adding the bright pink to the mix, and feel much happier with my colour choice now. The last one, Square #10, didn’t shape up very well at all, but I’ll rip it out and redo it later. (Later later later. Everything’s always later with me…)

On Sunday at the Kirstenbosch Market (and what a perfect early spring day it was, thank you craft gods!!), we introduced our salt and peppers sets to this year’s new batch of patrons. And guess which ones got snapped up first?

And last, for today, I recently commented on the renovations of the building opposite Salisbury’s in Woodstock. It seems the new owner is a ceramicist who will be giving lessons above the shop – she’s asked me to not supply contact details until a month or so, when she’s completely organised. In the meantime, this is how she decided to paint the outside:

8 thoughts on “This and that, including Rachel’s CAL”

Thoughts or comments? You can tell me :-) Cancel reply