I see I have 9 market days between now and leaving for the Village Green craft market in Grahamstown at the beginning of July. In an attempt to be more organised than ever before in my entire life, I have set up a “bag system”.  I now have a different bag for each “bigger” market, like Philadelphia and the Olive Festival, otherwise I’m not going to be as well-stocked as I would like. This should avoid frantic late-night sewing at the last minute. In theory at least.

The idea is that, once a hat has been bagged, it is not allowed to be taken out for sale at another market in between.  Rob got out his calculator the other day and came up with a ridiculous number of hats that should be my ideal quota for the day. I was quite put out by this, and had to take a nap immediately.

Here is the Philadelphia bag. The market is on Saturday 18 April and the bag currently contains  ten hats.  The Grahamstown bag, which is the biggest bag I could find, is up to twelve. There are  some half-finished hats lying around, but I’m not allowed to count these yet. 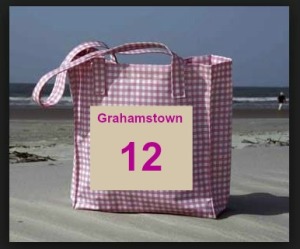 Thoughts or comments? You can tell me :-) Cancel reply