I’m pleased with the effect of adding the bright pink to the mix, and feel much happier with my colour choice now. The last one, Square #10, didn’t shape up very well at all, but I’ll rip it out and redo it later. (Later later later. Everything’s always later with me…)

On Sunday at the Kirstenbosch Market (and what a perfect early spring day it was, thank you craft gods!!), we introduced our salt and peppers sets to this year’s new batch of patrons. And guess which ones got snapped up first?

And last, for today, I recently commented on the renovations of the building opposite Salisbury’s in Woodstock. It seems the new owner is a ceramicist who will be giving lessons above the shop – she’s asked me to not supply contact details until a month or so, when she’s completely organised. In the meantime, this is how she decided to paint the outside:

Squares #5 and #6 = fabulous patterns. I’m very pleased with my efforts here, and will definitely use the stitch in #5 in other projects. (I feel a lampshade coming up….) 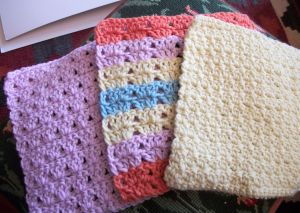 Then I looked at my square #2 again, and thought I’d done it badly enough that I should rip out and redo it. So, that’s the third one in this pic.

I’d decided that square #7 was yucky and that I’d give it a miss, but I’ve looked at it more closely and realise that the built-in corner thingie could be pretty damn useful in a blanket. Plus, what puts me off the most is that emerald green – maybe I’ll like it more in my own colour combo. #8 and #9 look wonderful, but I’ll have to pace myself – got orders to finish over the next couple of days (not complaining, mind you!)

I’m taking part in Rachel’s CAL. This is my beginning.

Cleaned out an old knitting basket and gave it a fresh piece of gingham lining.  Picked some potential-ish Cottage Garden colours in Pure Gold double knit, although I seem to have a preference for pastels here. (Note to self:  what are you thinking? Add in some brighter colours!!!).

Square #1 – complete disaster.  Colours all wrong, plus I undid and reworked a couple of times, before I decided that I don’t like working diagonally at all.  This asymmetrical square works much better folded in half as a sunglasses case.  But I still hate it. (Anyone need a glasses case?)

The next 3 were lovely to do, and I particularly like #4 with the bobbles. I’ve never been tempted to do bobbles before but now I think I’ll work them into some other things. 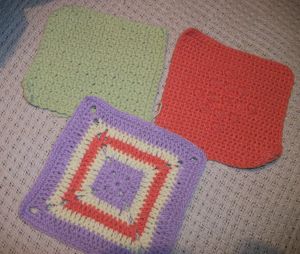 And then Jessie asked to be included in the photos. 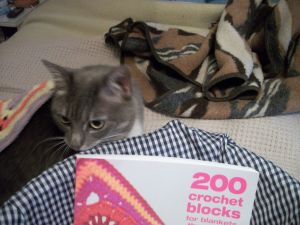 Pity I can’t teach her to crochet, then she could earn her keep.