I wasn’t exactly nimble this morning when I got up, but at least I didn’t have to grunt and stagger like I have the last couple of days. Clearly I’ve got off quite lightly with this slipped disc thng, and I think I’ll be ready to drive again by tomorrow. Just one more day of compulsory rest…. haha

I did manage to get a couple of things done while laid up: made a colourful doily, made some flowers for brooches, experimented with edging a baby blanket, ordered a Sharp crochet hook online, started Cindy’s babydoll top, made lots of lists, read lots of Hiaasen, allowed myself to be driven (in a reclining position) to friends for a braai yesterday, and made a resolution to finish what I start. Probably my biggest failing. Or one of them. Definitely up there with making impulsive purchases and not vacuuming regularly. 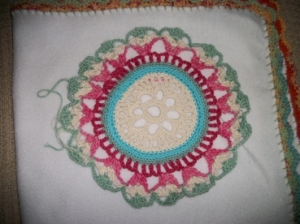 Thank you for all your kind thoughts and sending happy back-recovery messages my way.

Jam Tarts was at Rondebosch Market yesterday. It was evident that people are starting to buy presents for Christmas and others have an end-of-year overseas trip planned, so they can buy items that are winter-friendly.

A friend of Rob’s passed on a couple of body hangers which are wonderful for displaying shawls. Only thing is (and a couple of people commented on this as well), I think they’ll look better with knickers. What do you think?

And a happy ending for the first mirror I made with broken crockery: 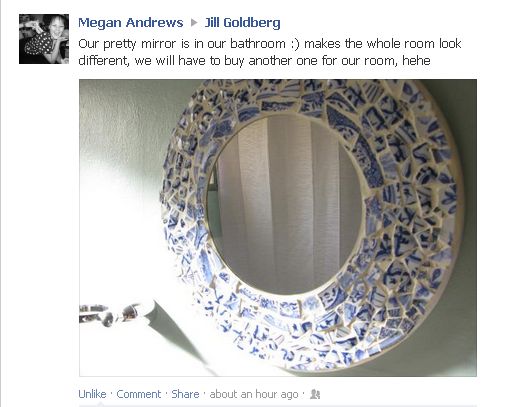 Have you ever made something for someone else and then forgotten all about it because you never see it again? And then get a huge jolt when you do suddenly catch sight of it, many years later, and you think, “Oh hey, I made that – and what the hell is it doing here ????”

I made this blanket for Alex  when she was about 8 or 9.  She chose the colours and the order in which they were to be crocheted (she’s still bossy like that).  For obvious reasons, we called it Rainbow Blanket.  Her dad and I separated a short time later, and Alex is now 18 and spending a year in London.  Brad* and I live fairly close to each other, and get on perfectly well.

Yesterday I went to his house to drop off his spare keys because he is going overseas himself next week and has a pal who will drop by every few days to make sure no-one has been a-burgling. We were standing talking in the passage   and his bedroom door was open and I suddenly see rainbow blanket on his bed.

“Oh, rainbow blankie,” I say, “I’d forgotten about that.”

“I know it’s Alex’s, I made it for her. Don’t you have enough blankets?”

“I like this one. And besides, she’s not here. And I didn’t know you’d made it.”

“Well, who else is likely to have made it, that you know of?!”

“I hope this isn’t the kind of thing you’re making and hoping to sell to make a living? It takes too long to give you a decent return on your labour.”

“Gosh, Brad, I wish you’d told me sooner, I thought I could knock up at least one a day.  I thought I would get to be a millionaire within three months making blankets by hand.”

Unasked-for ‘expert’ advice followed by sarcasm. Now that really takes me back.

* Not his real name.