Winter’s a-coming here in Cape Town and it’s getting chilly, so I’m sitting at my desk right now with A BIG FAT BRIGHT GREEN BONBON on my head! Nice and warm, and helps to keep the energy flowing (hopefully).

Just a brief update on the crochet lessons – my first lesson last Thursday went really really well, no whiskey required. I have the loveliest ladies in the world and we all got off to a good start. Tomorrow is Lesson #2, and I should be seeing some completed or almost-completed scarves, which will get jazzed up with a crocheted flower brooch. We’ll move on to the half treble and treble stitches, and get started on the fingerless mitts. Homework will be granny squares. (Yes, I give homework.) We had tea and Oreos – I didn’t have time to bake my own cookies. Who am I kidding, like that’s ever going to happen!

I had a lot of requests from people who want to learn crochet but can’t make a lesson during the working week, so I’m starting a new group on Saturday 7 June. Already fully booked! (I don’t want more than 5 learners, it’s nice to be able to give individual attention).

And in other news, I made my first delivery to A Real Shop yesterday, of penguin beanies and Ellas. I’m really hoping they do as well there as the owner seems to think.  The shop is called This Shop Rox, by the way, and it’s in the Hout Bay harbour area.

I’ve also been snowed under making hats – Mindys, Ellas, newsboys, men’s hats and caps, BonBons and stinky fish. Yip, a LOT of stinky fish. Here’s darling Kate in her new rainbow stinky, and the larger one pictured below on Carol is a special order from Kate’s mom as a birthday gift for a friend. 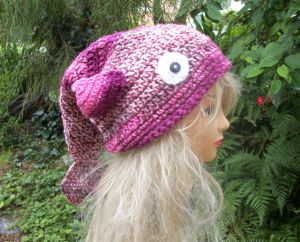 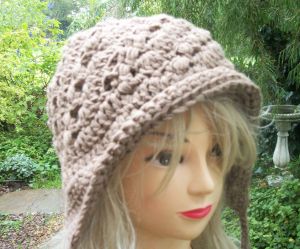 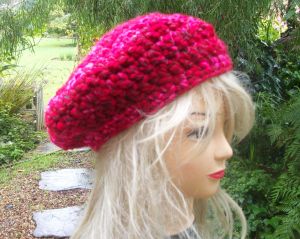 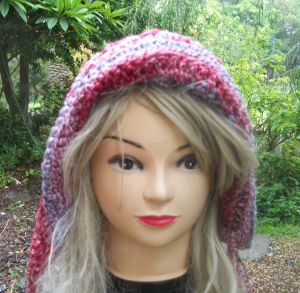 It’s overcast and a bit drizzly here, so Carol kept yelling at me to hurry up with the pics because I insisted on taking them outside. Consequently, some of them are rather poor. I think she forgets who pays the rent around here!!!

Rob and I tried another new market this past weekend (new for us, at least): About Holistic at the Bothasig Town Hall was hosting a gypsy market/festival so it seemed a good time to introduce the Jam Tarts ‘range’ to a segment of the Cape Town population that I don’t often visit.  Turns out there’s a damn nice bunch of peeps out there!

Gary, who sells leather jewellery, in his hand-knitted “gypsy” tunic that he originally bought for his wife – but she refuses to wear it!

Me with Steve, the shiatsu massage guy, originally met at the Constantia Waldorf Market and without whom I wouldn’t have discovered Bothasig! 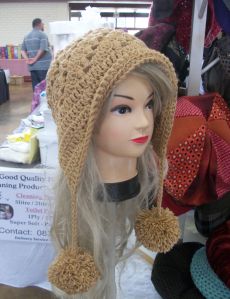 Carol in the new Ella hat – my most successful hat yet!

New customer Danelle in a black velvet newsboy. You have no idea how perfect this girl’s skin is!!! 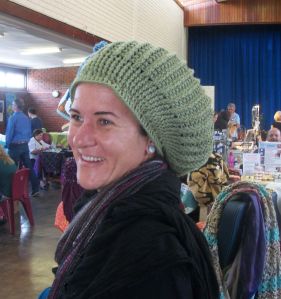 New customer Bianca with her dreads tucked up into a green BonBon.

And that’s not all – another customer, Bonnita, who took two newsboys, said that she’s going to recommend to her daughter that she stocks my hats in her Hout Bay shop.  How exciting would that be?! Jam Tarts getting seriaaaaas…… :-)

Thanks to Nina Ganci, who runs this market and does a wonderful job of advertising it within the community, and everyone else who made this day so great. I’ve already booked for the next event on 14 June – and I hear that the theme is belly-dancing.  Perfect for me, I won’t even need lessons – my belly dances all by itself!

At the last Kirstenbosch Market, I had a customer called Marie who bought a newsboy from me in dark autumny colours with a black brim (I’d only finished sewing it the night before, so forgot to take a photo).  Then she said she also wanted a BonBon but not in any of the colours I had available. She wanted one in the Cotton-On DK I use for my slippers, in Faded Denim. I said I thought that the cotton might be too heavy for the style (because it is quite a fat hat), but she showed me how she would wear it:

1. Pull the entire hat down right over your face.

I guess you now have a … what?  a baby BonBon with a sausage brim? I have to say, I’d never thought of that myself, and it looked stunning on Marie the way she did it. She assured me that she had lots of hats and knew exactly what suited her!

NB #1. She asked me to make the “welt” extra long so that she could roll it up as much as Carol has here; my other BonBons are a good 5 or 6 centimetres shorter.

NB #2. The cotton has made the whole thing a lot heavier than the ones made with acrylic, this one weighs 236g.

NB #3. I increased a few more times than usual with this one, because the cotton has less stretch than the acrylic.

I’m really pleased with the way it turned out. Hope she is, too. Now, where did I put her number…?

So, as I was saying before I was so rudely interrupted, I want to share with you how Eunice has taught me to make the BonBons.

But first –  please be advised : this is not a pattern for the faint-hearted or those who need instant gratification! This is a pattern for those of you who like to throw a bit of caution to the wind, to be adventurous, who do not stress over the exact number of stitches or any precise dimensions, and who can spend more than two evenings working on it.  This is a wing-it kind of a thing (exactly how I make lasagne, come to think of it!) It’s not a problem for me that no two are exactly the same because I sell them, so there is always someone who wants one slightly bigger, slightly smaller, slightly rounder, slightly longer, with a pompom, without a pompom, whatever. 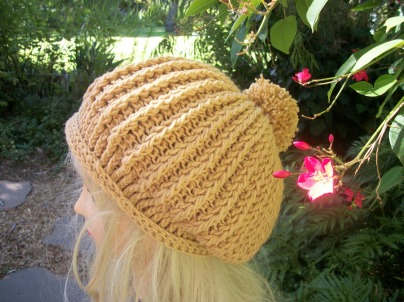 The caramel one above was made by Eunice, using Elle Pure Gold DK (acrylic) and a 4mm hook.
The green one below was made by me with the same yarn and hook, but my tension is much looser than Eunice’s.  I also had more stitches so I have a fatter hat with less shaping at the brim.

I’ve just started one using Elle Cotton On DK and a 4.5mm hook. There’s a lot less stretch with cotton, so I’m working more stitches in the round so that I don’t end up with a long, narrow hat that would only fit a long, narrow gnome. It looks like this so far: 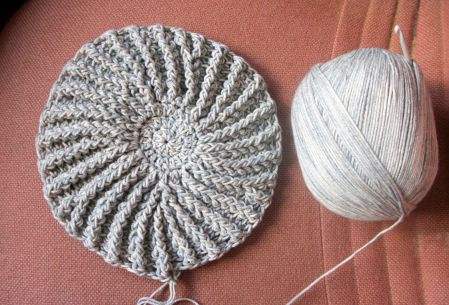 The first section is the circle for the crown. (I’m using British terminology).

NOTE: At this point, it would be useful to count the number of sts, so that if you want to make another BonBon the same, or smaller, or bigger, this will be your guide. (Eunice says she never counts, she just seems to know by instinct when it’s right.)

The second part is the main textured section. This is much much easier than it sounds. Basically, it’s all worked in front post trebles and back post trebles**  so that you get a lovely up-and-down texture.

Eunice makes about 6 increases evenly spaced around this row.

Now you just carry on crocheting merrily away until your BonBon is about the size you want it to be from crown to brim, excluding the brim (which you may want to wear flipped over anyway).

Note:  I did a couple more increases in about Row 11 of the cotton one pictured above because, as I said, I wanted to accommodate the lack of stretch.  It all depends on the yarn you’re using and how big you want the hat to be.

When you’re not increasing, and you’re just going round and round, you’ll start to see the dome shape form.

Work until the hat measures about 22cm in length from the very top (or less, or more, up to you).

Eunice’s brim is simply 5 or 6cm of front post trebles all around. With my green BonBon, I felt the brim looked like it was going to be too wide, so I first worked two rows of double crochet decreasing six times evenly in each row.  Then I did 5 rows of fptr.  End off and weave your ends in.

When you fold the brim over, you get a lovely contrast with the direction of the stitches.

I sold a lot of BonBons on Sunday at the Kirstenbosch Craft Market. Some girls wore a deep brim, some a narrow one, some had no brim.  It’s a pretty versatile hat.  One very stylish and charming lady of 72 has ordered one in dark brown that she is going to wear in a totally different way, that I had never thought of before.  I’ll show you that next time :)

Now, if these instructions really stink, please let me know – I’ve gone over and over them, but I may have made an error or overlooked something.  Fingers crossed not…

I have a market at Kirstenbosch this Sunday, so Eunice delivered five fresh BonBons just in time this week.  (At my last market, the green and the caramel BonBons were the first items purchased, one with and one without a pompom). She’s done another sterling job, but this time I lured her into spending the afternoon with me (I think it was the custard danishes that did the trick) and teaching me how to make a BonBon myself. 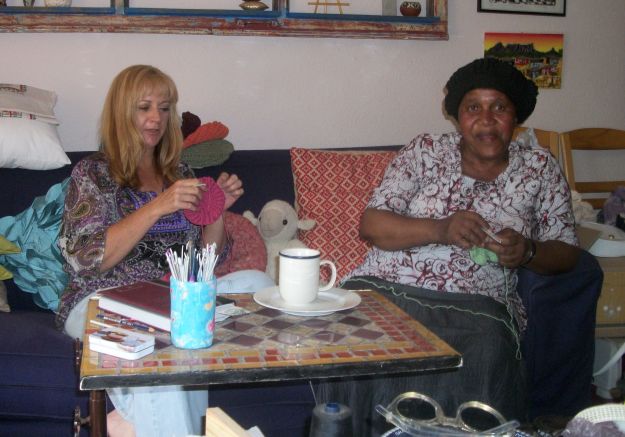 She needed a lot of patience with me. Luckily, she has enough and some to spare.  I got about an eighth of the way through a BonBon before realising that this particular stitch used in this particular design is too much for me. It takes TOO LONG. I will lose interest less than halfway into the making of it, and then there will be half-finished BonBons all over the place.  So, I’m going to stick to being the PomPomist and Eunice the BonBonist.

She is also now officially Jam Tart #2, whether she likes it or not — but I think she does. On Saturday night, around 11.30, just as I was drifting off to sleep, an sms came beeping in: “Jill, how’s your crocheting going? did you finish the pink hat?“.  Blimey, just what I need –  a slave driver…

The texture of these hats is really soft and squwooshy. Squoochy? Skwooshy? I don’t know, none of those look right, but you know what I mean.  FYI one hat (plus medium pompom) weighs 156 g, and we’re using the Pure Gold Double Knit and a 4mm hook.

Want to make your own BonBon? It’s dead easy and I’m busy writing up Eunice’s instructions for you, will post a bit later.