I think it’s mainly children who wish time would pass more quickly – until their next birthday, until the first day of school, until Christmas, that kind of thing. Adults less so (especially when it comes to birthdays.) But for me, for once, and very selfishly, I am utterly thrilled that March is over. It was an unpleasantly challengingly month for a number of reasons and they are now all behind me – and I seem to have survived with all mental faculties intact! (No rude comments from friends, please.)

My health caused a few problems, and consequently there was lots of admin and discussion with my medical aid. It’s all sorted now and Discovery Health has covered all hospital, medication and covid testing costs in full. I’m deeply relieved, it was a very large amount of money! The health issue is being resolved with help from beloved friends and, of course, dear Andrew.
My GP switched me to a different medication for hypertension (it’s been one of my chronic conditions for over 20 years) and after two days my feet and ankles swelled to the size of adult puffer fish, just like when I was pregnant 28 years ago. I wasn’t best pleased, and now have to take a diuretic daily on top of all the other goodies in my morning pharmaceutical smoothie.
Then there was the seemingly silly incident with Choccie, my cat: it is now her habit in the morning around 5h00 to approach my head on my pillow and pat my face with her paw. I’m usually half-awake already and, since her patting becomes less gentle and a lot firmer quite quickly, in order to make me get up and feed her, I sometimes cover my face and head with the blankets. She managed to catch me right in the middle of my open left eye on Sunday morning with all claws out – she was in a more impatient mood than usual.

The pain was excruciating but I thought it was probably normal and would just stop eventually. Three hours later, it had not and I’d patched it up with some cotton wool and masking tape to keep it closed. Even with only one eye, I was online (!) and was emailing my friend Kathryn in the US, who made me aware that this could well be more serious than I’d thought. My GP, an amazing man who never stops working (his rooms are open 7 days a week, every week, and he treats homeless patients at no charge), told me to get to him immediately. Andrew drove me there and I am extremely fortunate to have had no serious corneal damage whatsoever, just a “mild corneal abrasion”. Well, all I can say is that, if that was mild, other people who have eye accidents have all my sympathy.

By the next day, I could remove the patch and put in antibiotic drops to prevent infection, and I was able to drive. Choccie was in the dog box for a few days, even though I know she didn’t deliberately mean to hurt me.

My mother developed some covid-like symptoms and went to be tested yesterday. It took over 24 hours to get the results, which is absurd in my opinion, especially for someone who is 84, but she has tested negative – so great relief there!
The other big hurdle this month was emptying my house of Philip’s furniture and appliances, so kindly left in situ for my use by his children (but only because they were forced to under instruction from the executor!)
The reason for this is that my mother is moving into a retirement village and there isn’t room for everything she has. A lot of tables and chairs and other things were made by my dad and my grandfather, both carpenters, and I am certainly not ready to see the back of them just yet. I know my mother is pleased that I will be able to accommodate them, but I was filled with sadness at seeing Philip’s possessions being loaded into the back of a truck. Also, in sorting through cupboards and drawers, I found a few small things of his that I’d forgotten about. Spectacles, his old leather wallet, his bow-ties, that kind of thing. It seems that the feeling of missing someone never really goes away. I’ve turned one of his bow-ties into a brooch.

Shirts and blouses with collars aren’t my style at all, but I do have a loose white cotton blouse that I think this will work with. I couldn’t bear to have the elastic round my neck so that got chopped off and I stitched a brooch pin to the back of it. I’ve had the shirt for over a year, ordered online from a clothing shop I like very much that was having a sale, but I still haven’t yet worn it! I’ve come across quite a few items of clothing that I’ve bought and never ever worn, so perhaps now is the time to be ruthless and pass on what I clearly don’t need.

I was also obliged to fit in a trip to a dermatologist because my GP didn’t like the look of a mole on my back. I’m fair-skinned and have many moles here and there (have had at least three removed in the past), but I’m at an age where it’s not a good idea to put things off indefinitely so I had to wait a couple of weeks for an appointment with someone who has apparently has an excellent reputation. His diagnosis – seborrheic keratosis or, as lay people refer to it, a “senile wart”. How charming. Senile wart indeed!

My two closest friends have been having a terribly hard time with their health lately, which also affects their mental health. It’s a vicious cycle. One friend, whom I’ve known for over 38 years, has moved temporarily to Cape Town for eight weeks of radiation and chemotherapy at a highly respected cancer care clinic. Unfortunately for her, things aren’t going quite according to plan. At 57, she is two years younger than me, and it is a very distressing situation.

Some of you will be going into spring, and those of us in the southern hemisphere are going into autumn. Autumn really is my favourite season because Cape Town starts getting rain again and the garden just thrives. I usually get the urge to knit something at this time of year but that hasn’t happened yet. I seem to be hooked on beads, so I’m just going with the flow — and grateful that there is any flow at all :)

I’ve been making lots of plant hangers lately, mostly from shweshwe cotton but also using some other lovely fabrics. Buuuuuuuut….there hasn’t yet been a patchwork one. I thought Kate’s scraphappy project was the perfect opportunity to give it a go. 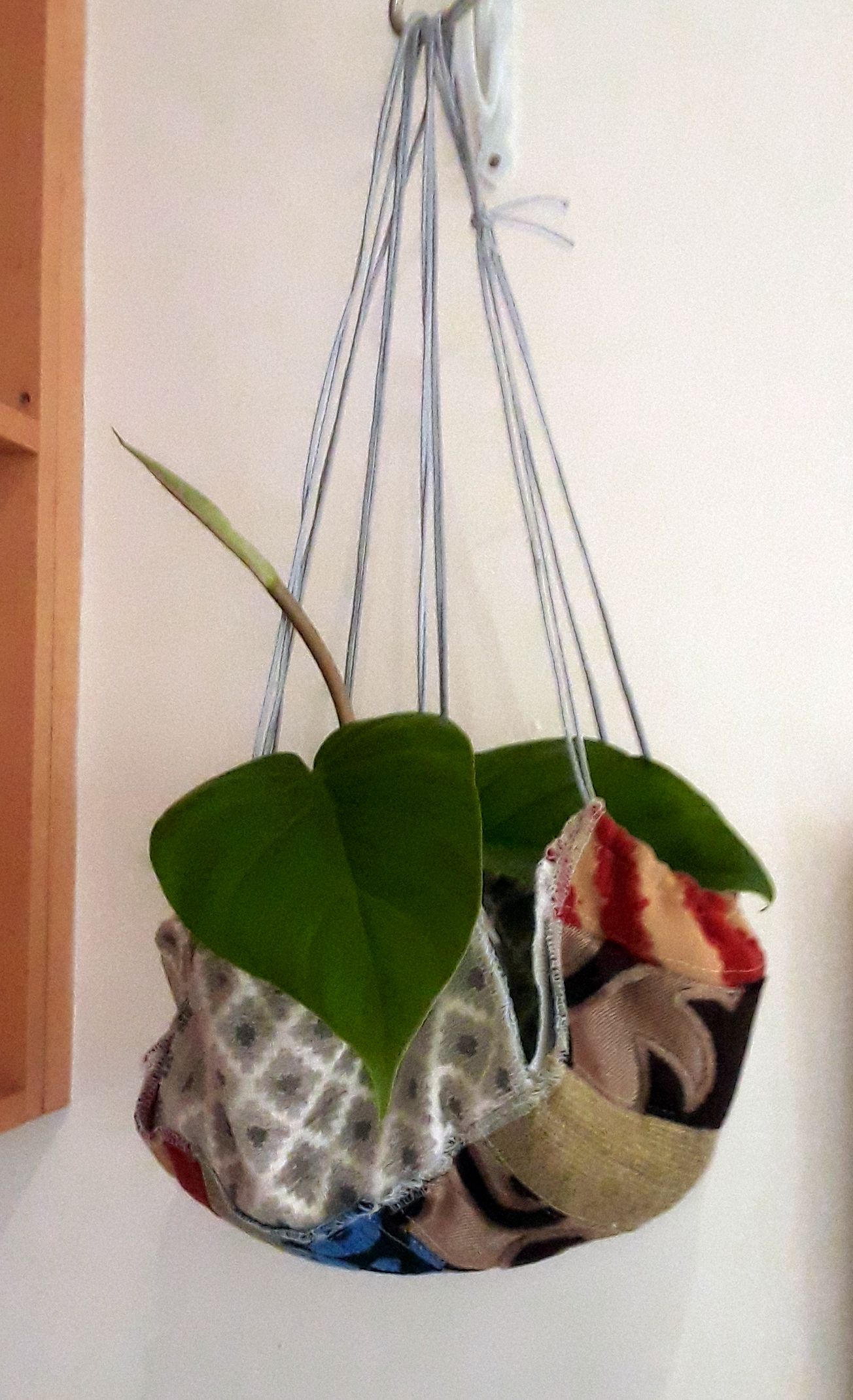 And this is the view of it from the chair at my desk: 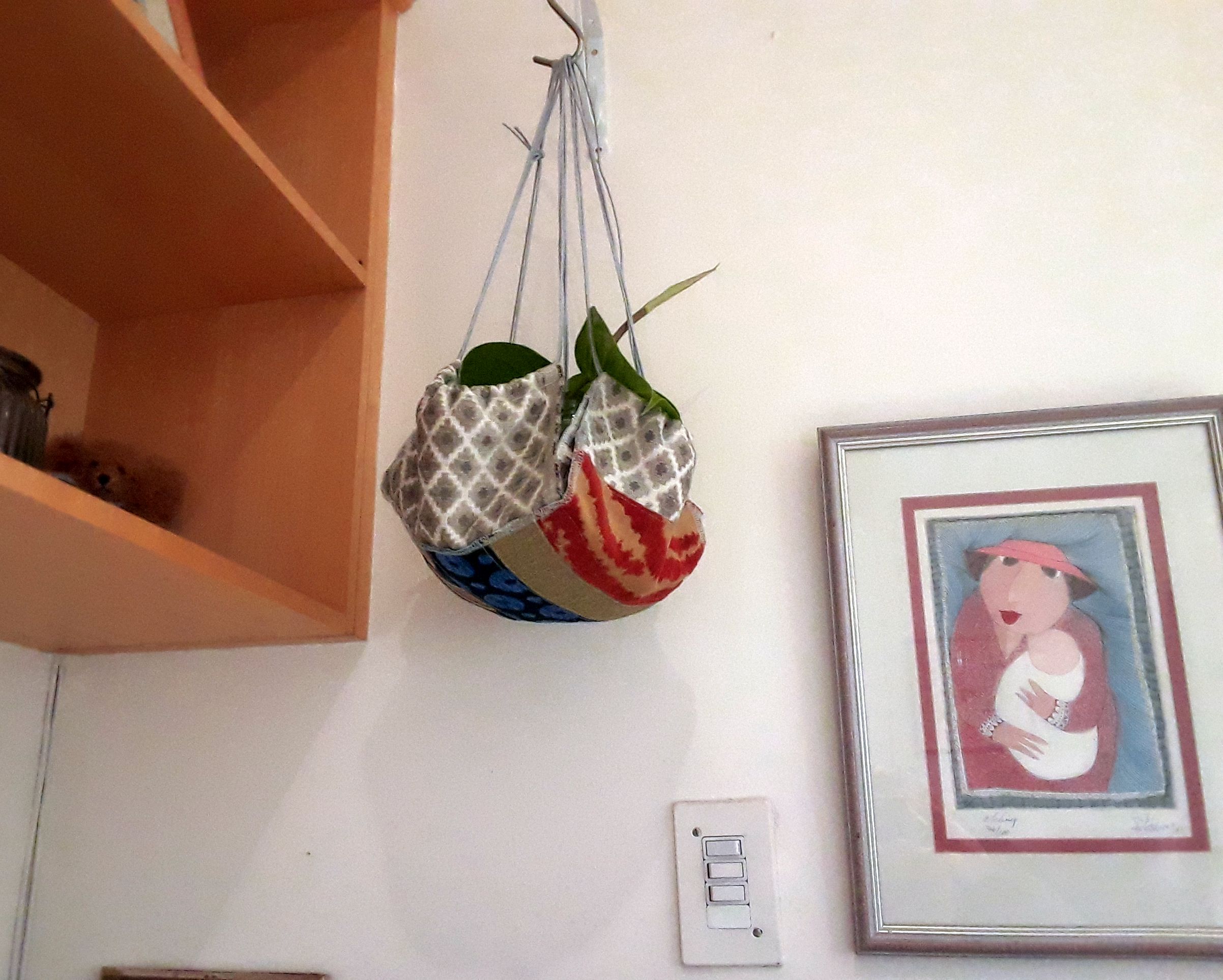 I overlocked the edges instead of double hemming like I do on the cotton ones, because I used scraps of upholstery weight fabric and thought it would look too bulky if I did it that way. The finishing isn’t perfect but it’s living with me in my house so I don’t mind :) I also didn’t bother too much about matching colours or textures – that, I figure, is half the point of using up my scraps!

Here are the links for everyone who joins ScrapHappy from time to time (they may not post every time, but their blogs are still worth looking at). I love looking at what everyone’s come up with!

Fabric beads. It’s a thing. I hadn’t even heard of the concept until a friend recently said she was thinking of running an online workshop on how to make them. My brain lit up like the Blackpool illuminations, and I hit the glorious mazes of pinterest and instagram to find out what I’d been missing.

I’d recently tried making fabric-covered wooden beads but absolutely hated the process — too fiddly, I wasn’t in a glue mood, and didn’t like the messy end result. Experiment aborted.

But the stitchy-type beads – ah, much more my style. I found some soft thick black fabric, cut a piece roughly 14cm by 6cm, rolled it up like a seasoned pot smoker*, stitched the edges neatly into place, then wrapped it with some burgundy cord, glittery ribbon and little gold beads. Stitched all that into place as I went, using black thread, 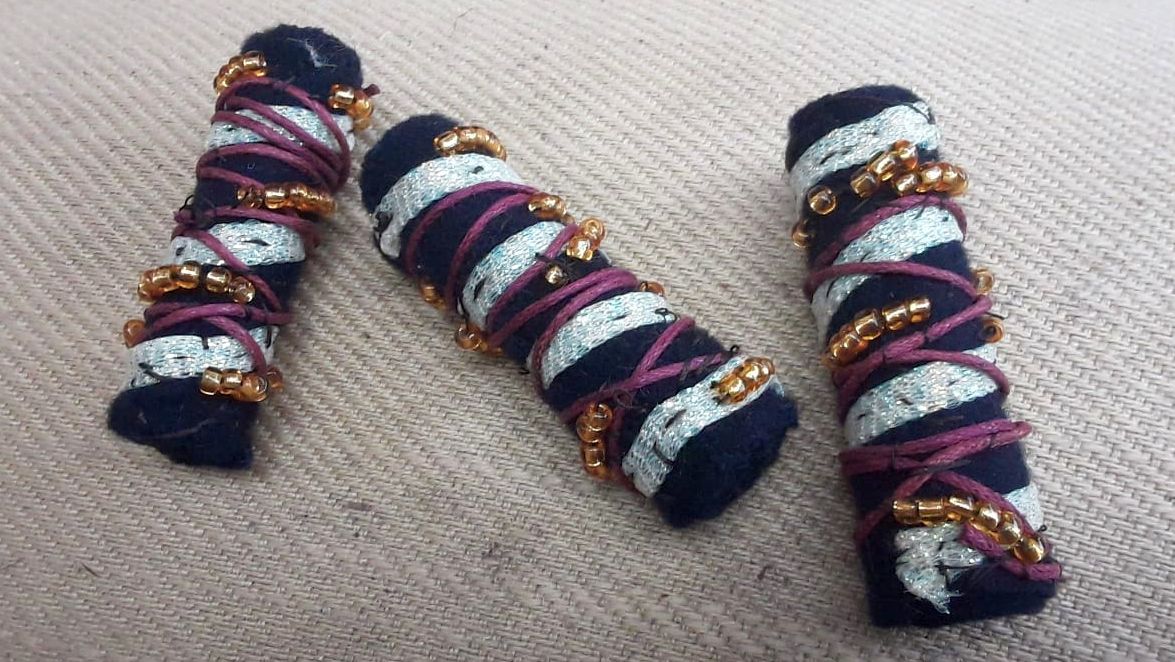 I made three and they didn’t take very long. A most enjoyable process, potential to use up scraps and all sorts of odds-and-ends, and I think the possibilities are endless. I think I’ll turn these into something that will go round my neck. Any other suggestions?

* Fyi  I don’t smoke dope, but that may change as our Level 3 Lockdown continues…. Just saying.

I can be clever on occasion, so I knew what to do — make more! Here’s another one: 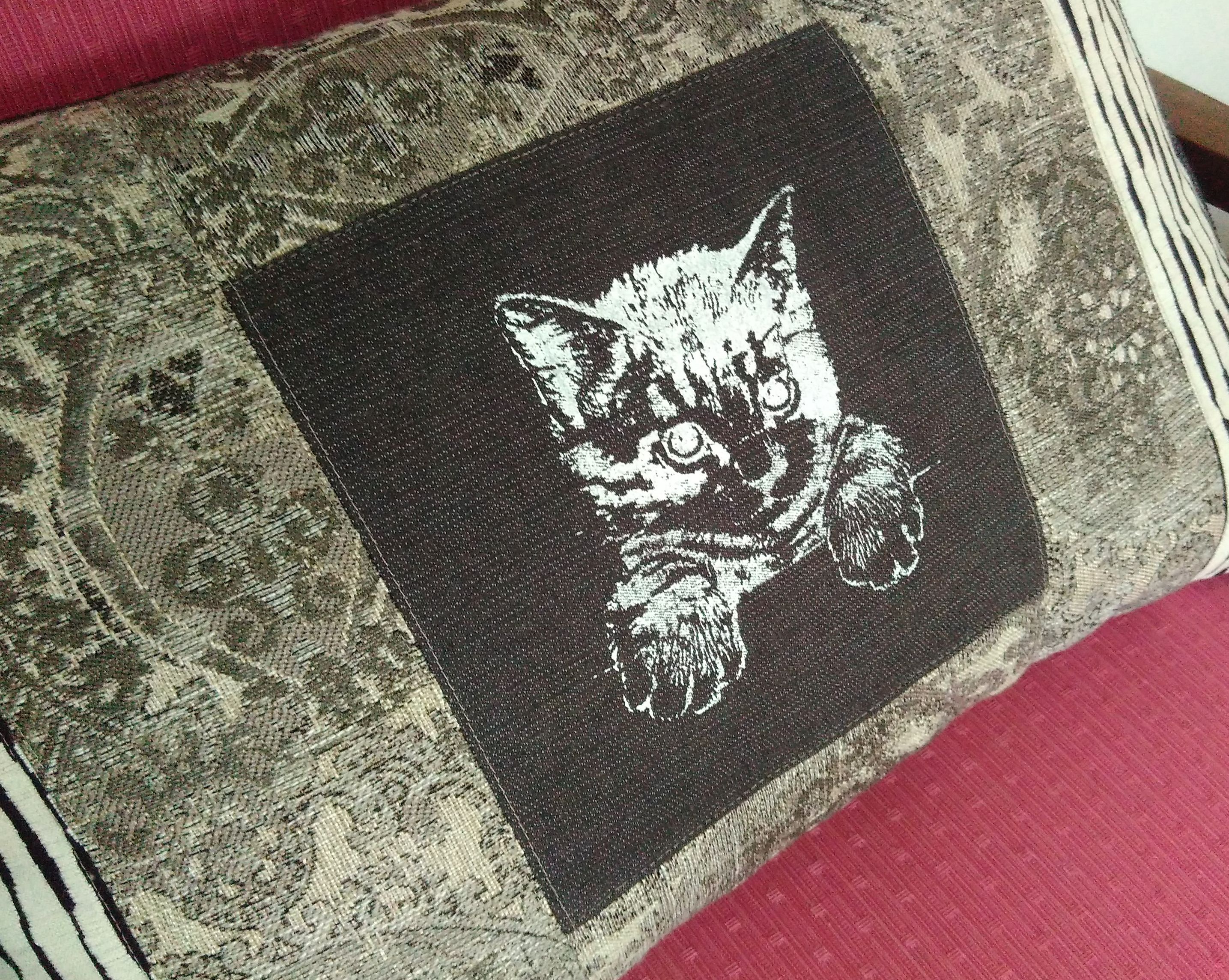 PS. The woman who bought the cat on Saturday phoned me yesterday to ask if I could make her another one (in a different colourway) so that she’s not without a cat cushion when the first one is in the wash. Purrrrrrr…..

It had to happen – this happy hooker has finally made her way down to the docks.

The Hout Bay harbour, with its amazing view of Chapman’s Peak and splashing seals and stinky fish (real ones!) and fresh fried snoek… okay, it’s a very small harbour, but still… it’s quite a tourist attraction (when it’s not winter here of course).  I took these pics this morning around 10h15, and as you can see the sun was shining, but we KNOW IT’S WINTER NOW because there’s actually officially SNOW on Table Mountain. Brrrrrrrrrrrrrrr

There’s also this cute little shop called This Shop Rox, and this morning I delivered my first batch of hats. Mainly penguins, but also 6 newsboys (pic was like blurry vomit so I can’t show them to you). 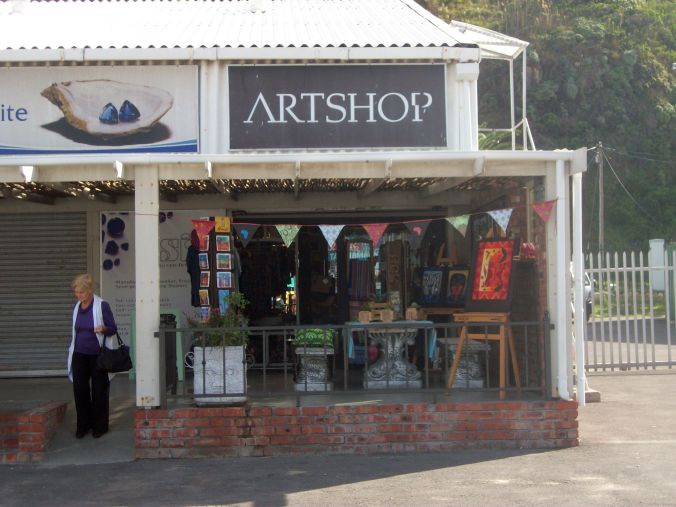 So many other reasons why I’ve been so scarce lately, but I should be able to share some evidence of the next one tomorrow.  It’s the approval day for the Cape Gift Market in November/December, and Rob has helped me with a great display.  I’ve still got hats to finish, so I’m off now….