So, a couple of weeks ago I was standing at my sink doing the washing-up. It was a Monday morning, quite early, and everyone was putting their rubbish bins out on the pavement because Monday’s the day the rubbish men come to Rosebank. I see the woman from the house across the road dumping her black bags and then she chucks out a piece of furniture!!! I was in my flip-flops and over the road before you could say “Other people’s junk”.

Turns out that it was a stool – was originally once a chair but the back disappeared – that had been in her great grand-mother’s house back on the farm.  I don’t which farm, or where, nor am I particularly good pals with this neighbour, but I do know that I can’t bring myself to relieve somebody of something that reminds them of their family history. No, not even me. Are you sure? Yes. Sigh.

That’s what it looked like. I said I would clean and sand it down and maybe give it another coat of paint. I also decided to make a round cushion for it. Now it looks like this:

As you can see, I got two free models – Jessie, and part of Alex.

I did give it another coat of paint, and tidied it up very nicely underneath, but I like the distressed look so I sanded it down all over again.  For the cushion, I couldn’t decide which fabric looked nicer so I used both! The orange is a shweshwe cotton that I love, and that you can get in all different colours now. The cushion also gave me the opportunity to try something I’ve had on the back burner in my head: crocheting an edge on something fabric. It’s hardly original, you’ve probably all been doing it for years, but Janette’s post about her apron (here) and the useful tip about working a row of chain stitch first  (here) via Ellen, finally got me going. My crocheted shells ended up being a bit tight, which is why they’ve flipped up and stayed flipped, but I still like the effect.

Liesl was getting rid of it because she said it was cluttering up their garage so perhaps it means less to her than it would to someone else (me!), but I said I’d do it for her and I have. Now all I have to do is take it back across the road. But what’s the rush? Maybe later — I’ve gotten quite fond of it.

When it comes to junk-combing, I thought I had already sunk as low as I could ever go. Other people’s rubbish bins, construction sites, the side of the road – if there’s ‘stuff’, I’m there.

But yesterday I discovered a deeper level: driving a long way down the coastal road to collect my new driver’s license in Fish Hoek, I passed two guys pushing a trolley full of – well, who knows what exactly, I could just see STUFF. The promise of treasure, someone else’s cast-offs to be lovingly renovated and given a new lease of life. Something else to pack into the garage to ensure that I will never ever be able to get my car in.

These chaps may have been surprised to see a middle-aged woman in a Mini Cooper screech to a halt, leap out, rush over and excitedly inspect the contents of their junk haul, but they didn’t show it. Like professional hucksters, they had set a price on the two items I suddenly felt I couldn’t live without, got them into my car and roped them up so I didn’t get banged on the head as I turned corners, in less than 2 minutes. What a fix!

And here they are: 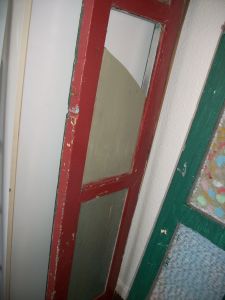 My two beautiful finds. My doors. Warped, broken glass, cracked, paint peeling, filthy, probably full of woodworm – aren’t they totally fabulous!? I have stashed them in a corner of my spare room for now, while I ponder on the possibilities.