Well, we’re in a right bloody mess, aren’t we? South Africa’s lockdown has been extended to the end of April. We have 1,800 confirmed cases and 18 deaths, so the guys in charge figure this is working. I know it’s easy to be critical from a distance, so I’ll just say that I’m sure the government thinks its doing the right thing “for the people” and leave it there. I will abide by the regulations, although I think some of them are excessive and pointless.

We can’t buy alcohol, so I’m hoarding two bottles of white wine under the bed and some gin behind the bookcase. (I don’t know why I’m hiding it, actually, since I live alone. The cat’s unlikely to be interested in a martini.) We can’t buy cigarettes and I only have four packs left, so I’ll have to start smoking something I can find in the garden. I’ll be going shopping in the morning (I have to choose the supermarket closest to my house), but I can’t buy wool to crochet a blanket or a new pipe for the vacuum cleaner because those aren’t deemed “essential items”. FFS.

Things I have been doing during lockdown, apart from fighting lethargy:

Signed up for an online language course – I’d really like to be able to speak German, also probiere ich es aus. Aber es ist schwierig! My accent must be atrocious but my friend Lara has a husband who is fluent in German, she said she’d lend him to me for a bit after lockdown. That will help.

Started reading the first of three volumes about the Third Reich, by Richard J. Evans. There are huge gaps in my knowledge of history, and my ex-husband recommended Evans as one of the best historians of this particular period in Europe. I’m up to the late 1920s, when the crash of the stock market in New York changed the world’s economy forever, and the implications for Germany and the Nazis.

Been making a few masks, but mainly just for people who ask for them specially. I use three layers of 180-count cotton fabric, as recommended by the WHO. I made the first one with pleats but it annoyed me so now I make them like this (easier and more comfortable): 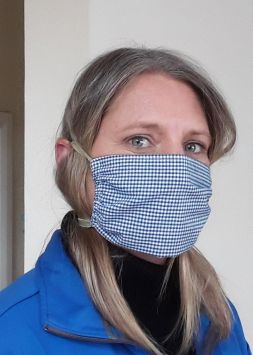 Painted a bookcase. Try to do my Pilates routine every day, to the accompaniment of a blues soundtrack from Spotify so that I forget to count.

Continued knitting a jersey for a friend’s 3-year old grandson in Bristol, who will probably never get it now. I haven’t found it very absorbing, which is a pity – I used to love knitting. I knit while watching Narcos, six fabulous seasons of the origins of the drug trade in South America and its global impact. I’ve almost come to the end, but have picked up a few useful Spanish expressions. Maybe I should have signed up to learn Spanish instead of German – aunque como van las cosas, no puedo visitar México.

Spent a lot of time on social media trying to help an NGO, The Service Dining Rooms, raise money and awareness for the plight of the homeless community in Cape Town. People have been very generous, which is extremely heartening.

Pottering in the garden and with my container plants. Some of the plants on the patio have mealy bug or woolly aphid or whatever that horrible white fuzzy thing is called, so I’ve made up my own spray with garlic and cayenne pepper. Hope it works. I also feed the plants regularly with stuff made from fish droppings or something similarly stinky. What can I say – the plants are thriving, but it definitely gets a bit smelly out there sometimes!

Over and out for now. Good luck with your lockdown. Maybe we’ll all come out of this with a different and better perspective on life, and a greater sense of gratitude for what we have.